The Armored Guard (装甲兵) is a type of enemy from Strider 2.

A secondary defense force located in Fortress Wahnen parallel to the Fortress Guards, the Armored Guards are easily recognized by sporting the appearance of ancient knights from medieval times, no doubt born from Herzog Schlange's "excentricities" and taste for anachronisms. These enemies are clad head to toe in old silver armor with matching red capes, and use melee weapons like axes and daggers.

They are seemingly subordinates of The Alchemist, although they are also seen following Schlange's orders after the former's death. Given the nature of the Dullahan its unknown if these enemies are human or animated suits of armor, but their appearance in the background of the New Life Development Section would indicate they were created by Grandmaster Meio's life powers.

The basic type of Armored Guard, these enemies are the most imposing of the three types, standing upright surrounded with their large, flowing red capes and their huge axes held over their heads. They slowly approach Hiryu when he's in their proximity, and when at the right distance swing their weapon downwards with force. Their attack is slow enough to be easily avoidable, however.

In harder difficulties, some of these guards come equipped with a golden shield in front of them, which provides them with an extra limited defense against attacks.

There's also a single Armored Guard faced in the middle of the 5th scene who has twice as many hit points but is otherwise unchanged.

The Light Armored Guard (軽装甲兵)[1] is a smaller, more agile variation of Armored Guard. They wield a three-pronged dagger or "Katar" in each hand. Thanks to their lighter suit of armor, these enemies perform quick leaps as they approach Hiryu and then attempt to strike him with a quick punching stab. They usually come in groups of 4 or more, attacking Hiryu from all directions, and usually as support of stronger bosses like the Elite Guard or Aluminium Hydra.

There's also a rare, red-colored version that appears at times alongside the common guards. These are identical in behavior but leave red Zenny instead of blue, which is worth more points.

The Armored Gunner (装甲砲兵)[1] is a long-range variant of Armored Guard. These guards are small and rotund, with a rather huge twin-barreled black cannon attached to their backs alongside a small red cape which hangs loose behind them. A stationary enemy, this guard simply shoots two projectiles at Hiryu when he's in front of him. They attack from mid-to-long distance, but their shot is always straight, and can't be aimed.

The Elite Guard (親衛隊)[1] is the mid-boss faced in the fortress' Inner Ward. This higher-ranking guard wears a black armor and a purple cape, and is always equipped with a shield. As a simple color variation, the Elite Guard acts no different from the regular Armored Guard, and is only stronger because he takes much more hits to kill, though his shield provides a better protection from frontal attacks, which now merely pushes him back.

During battle, the Elite Guard is assisted by several Light Armored Guards. 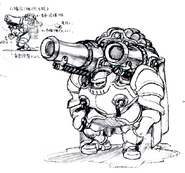