Dual Linear Gun (両リニアガン) is a weapon introduced in Strider 2.

The Dual Linear Gun is the standard-issue weapon for all crewmembers in the Flying Battleship Balrog. The weapon is a personal portable Railgun powered by electricity, with a secondary stungun function for close-quarters[1]. The weapon is small enough to be carried and used by a single soldier with ease.

The Dual Linear Gun is equipped through a belt strapped onto the shoulder of its user, which includes a signal pad indicating the flow of electricity[1]. A lever-style trigger installed on its left is used to shoot the weapon, and it also possess a horizontal handle on the right to help balance it when used. When an enemy is at close range, the weapon can be used as a stungun due to the electrode found at the tip of the barrel[1]. Concentrating a large amount of electricity, the weapon can be thrusted forward to create a powerful electric shock upon impact.

The Plasma Cannon (プラズマキャノン)[1] is a second, more powerful weapon used by a select few Infantrymen within the Balrog. As its name indicates, it shoots slow and powerful yellow plasma shots straight ahead.

As it utilizes much more electricity than the Dual Linear Gun, it is connected with a large backpack strapped onto its user's back. The weapon also includes a joint belt with a smaller pack which connects sideways with the weapon. The Plasma Cannon uses two horizontal handles similar to the Linear Gun, one serving as the trigger and another to keep it balanced when used.

Its possible the Plasma Cannon was based off the Shadow Tag Bullets machinegun from the manga, specially as both have a somewhat similar front design. 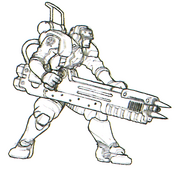 Front of the Shadow Tag Bullets