The Heavy Soldier appears to be a stronger variation of Light Trooper. It can be seen wearing heavy chest armor, a long coat underneath and a military cap with Kazakh City's half-star symbol. He wields a small gun on one hand and what appears to be a retractable knife on the other, coming from a metal piece set on his arm. His face is mechanical and sports a single eye.

As with most Trooper enemies, the Heavy Soldier was planned to come in several variations replacing his gun with different weapons. This included a "Heavy Machine Gun" type, a "Flame Thrower" type and a "Seeker Missiles" type.

It is unknown how it'd have behaved against Hiryu or where it was intended to appear, although his design bears a slight resemblance to the uniform used by Admiral Wilhelm, perhaps indicating they were to appear as soldiers on the Balrog. 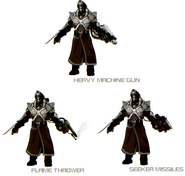