Kain (カイン, intended to be written Cain given the stylized "C" on his chest) is a character exclusive to the Strider Hiryu manga and its NES adaptation. His role and fate is notably different between the two versions: the manga shows him as the "brains" of his team with Hiryu while relegating him to the background when it comes to battles; while the NES version gives him less on-screen time, but in exchange shows him as more competent, being the first one who discovers Matic's betrayal.

Special A-Rank Strider and Hiryu's best friend since their time in training school[3], Kain appears to be overly optimistic, ignorant and a bit weak, but in truth this is a façade hiding a competent and intelligent Strider whose skill level is on par with Hiryu's. He's shown to be disrespectful and playful while on duty[4], but he knows when to take the situation seriously.

Kain's primary weapon is the Cypher, though he has also been shown capable of handling a variety of firearms, including a grenade launcher[4] and the hi-tech machinegun Shadow Tag Bullets.[5]

Kain discovers too late that Hiryu has left on a mission to rescue Dr. J. Hogan from a terrorist cell, the Phantom Unit. Outraged, he storms into Kuramoto's chamber and angrily demands to know why he allowed Hiryu to go alone, as it's been only six months since Hiryu was forced to kill his sister in battle and his work ever since has been very erratic. Kain worries Hiryu simply desires to die in battle and berates the old man for having wilfully ignored his state of mind. Kuramoto, however, rather coldly replies that Hiryu is no novice and that the organization has no need for "emotional Striders" carrying around their traumas, which leaves Kain speechless.

Some time later, Kain visits Kuramoto again. Having calmed down, he tells the old Strider that he has figured him out: As a Strider's path irrevocably ends in death and Hiryu is no longer fit to be a Strider, Kuramoto has given him a chance for a special retirement after the mission. Kuramoto simply replies that "Strider Hiryu is dead". They then talk about Hogan's rescue and how his savior was grievously injured, with Kain confident that he survived and is alive somewhere.

Two years later Kain, together with Strider Sheena, are assigned to support the Rebel Army formed in the Kazakh Federation. They assist to a rebel's meeting in a secret hideout, where Kain gains the ire of all the attendees by acting uncaring and aloof while flirting with a female rebel. When the hideout is assaulted by the Kazakh Secret Police, however, Kain changes his attitude and assists the rebels in battle. After a valiant fight, however, Kain is tricked by a little girl feigning an injury and shot with a tranquilizer dart. Falling unconscious, he is captured by the police Commander and subjected to the ZAIN Project's mind control, which leaves him comatose.

Matic then forces Hiryu out of retirement to find and eliminate Kain now that he's a liaison. With Sheena's assistance (who's oblivious to Hiryu's orders), Hiryu finds and retrieves Kain but can't bring himself to kill him. Stopping at a rebel safehouse due to a blizzard, Kain eventually recovers consciousness. With a sudden change of personality, Kain picks his Cypher and attacks Sheena, wounding her in the shoulder, and then turns his attention to Hiryu. Sheena tries to stop them from fighting, but Kain fatally injures her. Enraged, Hiryu throws several Kunais at him, one striking his neck (where the mind-control device is found) and knocking him out instantly.

Kain recovers a short time later, and discovers Sheena's dead body. Upon realizing he was responsible, he becomes deeply saddened, but Hiryu is able to talk him out of it. After hearing about Enterprise's ZAIN Project and how Hiryu's sister was also a victim of it, they both swear on Sheena's grave to stop their plans.

Kain and Hiryu infiltrate the Kazakh Federation Mental Institute, having guessed it houses a ZAIN research lab due to its high electric and phone expenses, and destroy the ZAIN Terminal located there. They then travel to the Amazon and uncover the location of the enemy's headquarters through the terminal's satellite link. During their fight against Striders Arana and Kubira, he's first trapped by Arana's web wires and later almost eaten by Kubira's crocodiles. Both times he's saved by Hiryu's quick actions. When they arrive at Enterprise's skyscraper they infiltrate it by disguising as repairmen, Kain assuming the identity of German engineer "Rein Hardt" (ライン・ハルト)[1]. Before being discovered by Matic, Kain implants several bombs and later activates them to help their escape. He splits up from Hiryu there, and reunites with him just as he was fighting Matic, in time to shoot down the soldiers backing Matic and force him into a one-on-one duel with Hiryu.

After Matic's defeat and the destruction of ZAIN, he's last seen talking with Director Kuramoto about Hiryu, who has already left.

Kain is captured by enemy forces while investigating on Kazakh, and Strider Matic calls Hiryu out of retirement to kill him, citing that once he's discovered by the enemy, there's no point on a rescue mission. Hiryu refuses to kill him and, after some investigation, finds and rescues him. He's unconscious, so Hiryu brings him back to the Blue Dragon. Through a recording, Kain reveals concerns about something known as the ZAIN Project, and considers Chief Kuramoto may know something helpful.

When he returns from Japan with Kuramoto's information, Kain awakes and suddenly turns on Hiryu, attacking him violently. Hiryu knocks him out. Having learned from Kuramoto about ZAIN's mind-control abilities, he swears to take them out and ask Sheena to take care of Kain. While Hiryu is out destroying the various ZAIN Terminals, Kain sneaks out of the Blue Dragon when Sheena was not looking.

Now in his right mind, Kain starts to chase after Matic, knowing about his involvement on the ZAIN Project. His attempt to capture Matic fails, however, and he's fatally injured. With his last strength, he sends a message to Hiryu revealing Matic's location: the Red Dragon.

Being a Special-A rank agent, Kain is among the strongest members of the Striders, with Matic claiming that no current member outside Hiryu would have a fighting chance against him[6]. While Kain wields a Cypher much like Hiryu, he's also good at handling firearms. During missions, he seems to prefer a more tactical approach, awaiting for the right time to strike at his targets by exploiting any weakness he finds. He has a good eye for details, as he noticed the ultra-fine wires from Arana's wire trap, which are almost invisible to the naked eye, before Hiryu did.[7]

Kain is also a good strategist, seemingly coming up with some of the duo's plans, like finding out the ZAIN laboratory by checking for high expenses of electricity and phone line in the Kazakh area[8]; or destroying the Amazon Institute to get a trip to Enterprise's HQ, having correctly guessed medic aid would arrive to take the injured back to HQ so as to keep them from revealing any important information.[9]

During his time under ZAIN's mind control, Kain fought on par with Hiryu, seemingly matching him in both strength and speed. While in this unrestrained state he appeared unstoppable, in the end he was instantly knocked out by striking the ZAIN implant in his neck. 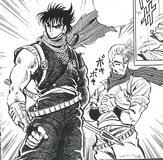 Kain (upper right) in promotional artwork for the manga

Hiryu and Kain, from Nintendo Power

As seen in the NES intro

NES Sprite
Add a photo to this gallery

Retrieved from "https://strider.fandom.com/wiki/Kain?oldid=10429"
Community content is available under CC-BY-SA unless otherwise noted.