Ports and Other Releases

Marvel vs. Capcom 2: New Age of Heroes (マーヴルVS.カプコン 2 ニューエイジ オブ ヒーローズ) is the fourth installment in the Marvel vs. Capcom crossover fighting game series. The game first received a perfect port for the Sega Dreamcast, and later two more ports for Xbox and PlayStation 2 in late 2002. In 2009 the game received an updated HD digital release for both Xbox Live Arcade and PlayStation Network in 2009, with features such as a customizable soundtrack, online play and achievement/trophy support. An iOS version was also released on 2012 for sale in the Apple App Store. All digital releases were delisted at the end of 2013.

Marvel vs. Capcom 2 introduced a major change in the series' gameplay with the introduction of 3-on-3 tag battles, the player now selecting 3 characters to form a team, and freely changing between them mid-battle. Gameplay was also arranged around this feature: button layout was changed from 6 to 4 attack buttons + 2 assist calls, with medium attacks only accessed by chaining 2 weak attacks together; an assist system was implemented that allowed one to choose from 3 different sets (α, β and γ) determining which technique is used in assist calls and Double/Triple Hyper Combos, and the introduction of a new universal technique known as "Snapback" which forces the opponent to switch to one of his non-active characters for a short time.

Unlike the previous game in the series, Marvel vs. Capcom 2 has an original, if extremelly simple, storyline. There's a legendary evil believed to be just a fairytale, a immensely powerful entity known as "Abyss". Through the actions of a pirate organization seeking to claim it, Abyss is set free from its confinement in limbo. From his armor comes forth hideous waves that mutate fishes and accursed winds that destroy all life on land. All the game characters gather together to stop it before everything is lost, intending on sending Abyss back to the "Sea of Genesis".[1]

Three original Capcom characters debuted on this game: Ruby Heart, a renowned pirate captain who searches for hidden magical objects[2]; Amingo, a member of a gentle and cheerful race of plant people on a quest to find the source of the accursed wind which is killing plantlife[2]; and SonSon, the granddaughter of the protagonist of an old Capcom game also named SonSon, who leaves on a quest to save her village from a strange sickness with her grandfather's legendary Ruyi Jingu Bang on hand[2]. Ruby Heart is usually seen as the main protagonist of the game, being the owner of the flying ship that transports all characters into battle.

The game has a total of 56 playable characters, plus the non-playable boss "Abyss", an original character created exclusively for this game.

Strider Hiryu returns in this game mostly unchanged from the previous game, using the same sprite set. Within the game's community Hiryu became one of the few characters perceived as a viable choice, and is best known for a team strategy with Dr. Doom known as "Team Clockw0rk" (after the player who invented it), which basically consists on trapping the opponent in a defense state by using Hiryu's Ouroboros Hyper Combo and Dr. Doom's "Molecular Shield" attack. As a result of this, fan works in the community tend to portray the two characters as being good friends.

As part of the promotion for the HD release of the game, Capcom commissioned UDON to create official art and a set of 6 trailers. Hiryu was one of the 12 chosen characters alongside Ryu, Jill, Zangief, Mega Man, M. Bison, Wolverine, Storm, Hulk, Iron Man, Spider-Man and Magneto. He stars in the 5th official game trailer, paired up once again with Spider-Man[3]. He was also one of the six characters featured in the digital demo.

Hiryu sports 5 different color choices, all of which are original for this game, outside of the LK color which is his original Color 2 from the first Marvel vs. Capcom.

Hiryu's moveset remains practically identical to Marvel vs. Capcom: Clash of Super Heroes, with minor tweaks in their functions at most. The only new technique is a variation of "Formation A", in which Hiryu now calls forth an Option C to fly through the screen if using the HK button, while LK summons the panther as normal. This technique is later named "Formation A2" in Ultimate Marvel vs. Capcom 3. 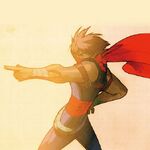 Hiryu in the game's ending