Minna to Capcom All Stars

Minna to Capcom All Stars

Minna to Capcom All Stars (みんなとカプコンオールスターズ) was one of a group of six mobile phone games distributed by social networking service GREE for their mobile platform. The game went live in October 2012 in Japan for the DoCoMo feature phones, Android (2.2 and up), and iOS (4.3 and up).

Billed as a "Hero Training RPG"[1], the game was a free-to-play social RPG with card-based teams. As the name implies, it included character cards of several Capcom characters from past and present, ranging from 1984's SonSon all the way up to 2012's Asura's Wrath. The game's plot focused on the defense group "Capcom Savers" (カプコンセイバーズ) or "CPS" (a play on the company's CP System Arcade board) as they sought Capcom heroes to fight against an unknown chaos energy threatening Capcom World. Strider Hiryu was one of the confirmed character cards.

The game was discontinued in April 11, 2013 alongside Minna to Dai Koukai Frontier[2], a pirate-themed game starring Marvel vs. Capcom 2's Ruby Heart. Some time later, Street Fighter × All Capcom was revealed as part of a set of 13 titles developed by Capcom[3], a direct successor to All Stars sporting similar gameplay and reusing most of its artwork assets. 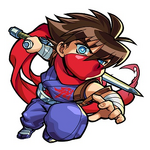 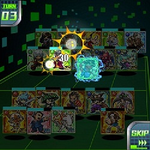