Modified Guillotine (ギロチン改)[1] is a type of minor stage enemy from Strider 2, present in the game's second stage, Fortress Wahnen.

The Modified Guillotine is a small machine in the form of a set of chained guillotine blades with three centipede-like mechanical red legs. The machine moves around the upper tubes in the early area right before the entrance to the Prison Tower. It only attacks if Hiryu is right below it, by dropping the two guillotine blades on him, then retracting them back.

The enemy is hardly a threat, being slow and easy to evade and destroy, or even simply ignore.

The Armored Creature Rasenmäher (鎧生物ラーゼンメイヤー)[2] is another guillotine-based enemy from the same area. its name is the German word for "lawnmower", in reference to its spinning blades. This creature is a two-legged walker with twin large guillotine blades in its center. The Rasenmäher walks forward (or backwards, if Hiryu stands behind it) while spinning its blades around in circular motions. Any hit that doesn't destroy it pushes it back a little, slowing it down.

The first Rasenmäher Hiryu faces is notorious because it appears in front of a floor door trap surrounded by ceiling burners, making it difficult to deal with it without being hit by the flames or falling into the trap door. They are otherwise easy to destroy. 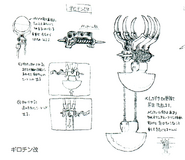