Option A (オプションA) is one of Hiryu's three offensive Options, debuting in the first Strider and returning in Strider (2014). It's also a primary part of Hiryu's movelist in the Marvel vs. Capcom series.

Option A is a small top-rounded satellite-like drone with two small legs. it moves around Hiryu after being picked up, either by walking or floating in a loose circular orbit. Whenever an enemy is nearby, the Saucer attempts to destroy it by contact. Every time Hiryu attacks, the Saucer shoots a ring-shaped projectile which homes-in on the closest enemy, and returns afterwards like a boomerang.

Hiryu can hold a maximum of two of this Option at the same time, and the lifebar units connected to them change from green to red. They have no time limit, only dissapearing if Hiryu loses the life unit linked to them. Its stated Hiryu controls these Options through a control unit found in his waist[5], likely in his loose-fitting belt.

Option A possess the following equipment:[5]

Shock Absorber (ショックアブソーバー) - Installed as the "feet" of the Option allowing it to walk through any surface unhindered. The legs function by a Joint Movement Motor (関節可動用モーター ) installed on each one.
Gravity Control Engine (重力制御エンジン) - A machine found inside the Option's small central part, allowing it to float around Hiryu in an orbit.
Body Balancer (ボディバランサー) - Found above the Gravity Control Engine to further assists in its movement. 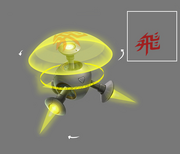 Option-A takes the form of a small round-shaped satellite with a yellow plasma circular top marked with Hiryu's "Hi" kanji, and three small extensions on the bottom (now a tripodal drone, rather than bipedal). Once active, two Option-A circle around Hiryu, protecting him from projectiles that the Reflect Cypher can't deflect, such as missiles and high-caliber fire. It also assists Hiryu by shooting yellow plasma orbs whenever he swings his Cypher. The Option can also hack specific electronic locks or computer-protected control devices to unlock new areas.

The Option is the second one of the three to be found, located inside a Pickup Cradle in the Industry's Ventilation Station, protected by the three Winds. During battle, Tong Pooh can also summon her own version of the Option-A, producing two green-colored units to briefly assist her.

In Marvel vs. Capcom[]

Hiryu uses Option A in his Formation B technique, where he summons a single unit which floats next to him, and can be turned into a fiery projectile by repeating the command. The attack serves as a long-range projectile move.

Option A is also summoned during Hiryu's iconic Hyper Combo, Ouroboros. Much closer to their original function, two Option A spin around Hiryu, damaging the enemy on contact and shooting plasma rings whenever Hiryu attacks. The Hyper stays a limited time, indicated by a small depleting bar that appears on top of Hiryu's energy gauge.

The Option's gameplay function in the 2014 Strider was based on the Hyper Combo. All Option A moves are also featured in Hiryu's movelist from Project X Zone 2.

Option A appears as a power-up item in the DLC mode Super Ultra Dead Rising 3' Arcade Remix Hyper Edition EX Plus α. Once activated, the Option works as usual: two saucers appear surrounding the player character, and damage any zombie that comes into contact with them. They also shoot blue energy orbs each time the player attacks, which explode into larger blasts when making contact with zombies or any surface.

The power-up lasts around 10 seconds.

Option A appears in Monster Hunter Generations as part of a Strider-themed free DLC equipment set. In-game it is simply called "Option" in English and "Support Machine" (支援機械) in Japanese. It only serves as crafting material needed to create all parts of the "Hiryu" armor set and the "Light Sword Cypher" weapon.

Its description reads: "A small robot that supports Hiryu on his missions by firing beams or blocking attacks."

Hacking through a lock mechanism

Option A card in TEPPEN