Osman, known as Cannon-Dancer (キャノンダンサー) in Japanese, is a 2D side-scrolling game developed by Mitchell Corp. and designed by Kouichi "Isuke" Yotsui. As Isuke's second action platform title it was heavily inspired by Strider, to the point it was called "Strider Hiryu Part 2" among some of its staff[2][3]. Yotsui himself considers it an "irregular" sequel[4] and has called it "[his] Strider 2".[5]

The player controls a martial arts mercenary named Kirin as he travels and journeys through six stages set in exotic locations, facing obstacles and a large number of enemies in order to reach the end of the stage and defeat a boss character.

Osman is set in the near future in a world governed by a single ruling entity known as the "Federation" or "Federal Government"[6], an overbearing capitalist government who oppresses its people in the name of "freedom". The game stars Kirin, a top class agent in a mercenary unit known as "Teki", whose members train and offer their skills as "weapons" for hire.[2][6]

Kirin is hired by Federal attorney general Jack Layzon to rid and save one of his cities from a terrorist-leaning cult named "Slaver", who worships a "God without Shape"[6][2]. Kirin infiltrates the city in the midst of the night and makes his way across until he reaches the cult's main temple. Once inside, however, Layzon suddenly appears with a huge police force and, using all the disturbance caused by Kirin as a legal excuse, has the cultists arrested. Having no further use for Kirin, Layzon betrays him via the police force suddenly attacking Kirin without any warning and leaves him to die in a scorching desert by way of Kirin being chained to a large rock formation.

Kirin, however, manages to survive by using his inner strength to break free from his chained imprisonment and starts moving with a single goal in mind: getting revenge against Layzon. As he travels toward the Federal Capital in Prague, he has to face not only the government forces, but also the other three members of the Teki who want him dead for personal reasons. Kirin also attracts the attention of the goddess Slaver, who shows special interest in him and his quest for revenge for her own mysterious reasons.

The gameplay is directly inspired by the original Strider, featuring the same freedom of movement and agility, ability to climb through any surface and attack methods, while introducing new elements and offensive options.

Osman features an eight-way joystick and three buttons, "A" to attack, "B" to jump and "C" to activate a screen-clearing attack. Kirin moves and controls very much like Hiryu, being able to jump and perform long somersaults at any angle and direction. He's capable of sticking and climbing through any surface just like Hiryu, although without the need of a climbing tool. Kirin can move freely across any surface and by pressing up while under a platform, flip himself up onto its top. Kirin can also start sprinting then running by holding forward, required during certain areas where he must outrun an obstacle or jump across distances.

Kirin's health, much like Hiryu's, is represented as a three-unit lifebar positioned at the top left of the screen, with each unit taking one instance of damage. Above the bar stands the player's score, while the number of lives are marked below next to a "P". Time remaining to complete the current section of a stage is shown at the top center of the screen. Finally, three red squares with a white "S" at the bottom left indicate the stock for Kirin's special attack.

Unlike Hiryu, Kirin fights entirely barehanded. Pressing the attack button makes him perform both roundhouse kicks and punches in rapid succession. Kirin can strike while standing, crouching, jumping or even climbing as well. Besides his basic attack, Kirin has access to a variety of melee techniques:

Osman features a total of six stages set in different, exotic locations. Stages 1 and 2 are set in the "Gulf City of Gran" (Agadan in English), a futuristic middle-eastern city under terrorist control. The third stage is set in the "Fire Desert of Bafua" (Cabil) and its underground mining complex. Fourth stage happens across the "Ruthless Indian Ocean" as Kirin sinks an enemy warship. Fifth stage is divided in two parts: first in the "Forest of Memory" (woods near Aleppo), a mysterious place where the past and present intertwine; then in the "Federal Capital City of Prague", seat of the government. Most of the final stage happens in a hellish location around the Arctic and ends in the Heliosphere where the final boss is fought.

The third stage features two instances where the path branches out in 3 and 2 choices, respectively. The choices here determine in which order the three members of Teki are faced as the 3rd, 4th and 5th bosses. In the Japanese original each Teki have unique dialogues for each scenario, but the English version changed them to a single line for each Teki to say when faced in the 3rd and 4th stages and the same shared line for the 5th.

Unlike Strider, all stages but the final have no checkpoint areas and Kirin respawns on the spot where he was last killed. For the final stage this is altered so Kirin is send to predetermined checkpoints when killed, noticeably amping up the difficulty for the game's last stretch.

There are four colored capsules spread throughout the stages, encased in flying containers: Yellow increases Kirin's health by one unit (for a max of 4), Green restores a single unit of health, Blue restores all units of health and Red increases Kirin's abilities up to 4 times, indicated by the color of his pants (with blue being the initial/no upgrades color):

Each time Kirin is hit he reverts to the previous power-up. An important element of gameplay is to know how and where to position the doubles to better strike at difficult enemies and large bosses.

As a direct follow-up action game by Yotsui, Osman carries plenty of similar concepts and ideas in its backstory and gameplay to Strider, creating subtle connections between them. Such connections to both games would be further expanded up in Yotsui's third action game, Moon Diver.

Artwork from a 1996 calendar from Gamest, by Utata Kiyoshi 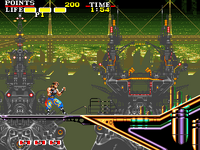 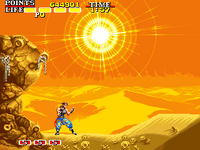 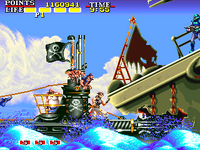 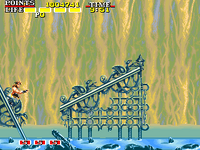 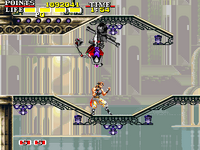