This article lists all known conceptual and prerelease content related to the NES version of Strider.

Two screenshots from an early advert for the game, establishing its release date to be October[1]. These two screenshots are from an early point in development, although the only notable difference appears to be the missing "H" and "E" next to the health and energy numbers.

Two more screenshots published in one 1988 article from Famitsu together with the ones above show Kazakh's initial area had a number of differences in appearance: 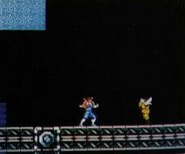 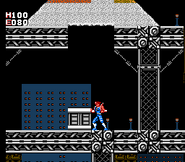 Screenshot from the released game

These screenshots also show elements seen in the dumped prototype described below such as the Russian Infantryman's early sprite design and the starry sky. Nonetheless, the prototype has all the sprite differences from the first stage already changed to how they appear in the English released version.

A prototype of the cancelled Famicom version was dumped in 2014 and released online. This prototype appears to be from late in development, and resembles the English released version very closely. Almost the entire game is included, although the final stages are not fully completed and the ending can't be accessed due to a glitched final boss battle.

There are also a number of differences in gameplay and stage layout when compared to the released version, apparently an attempt to lower the difficulty for the English audience.

A rare promotional video using an early build of the cancelled Famicom version[2]. Whether this build was created before or after the known prototype is uncertain, although it does feature some unique unused elements of its own: