This article lists all known conceptual and prerelease content related to Strider 2.

Early during the game's development, it carried the tentative placeholder title "Strider Hiryu", with a simple white logo being used in trailers and other material[1]. The decision to brand the game "Strider 2" came later in development, and adding "2" to the title made attempting to fit everything consistently in-game difficult, since it was originally developed with the idea it was a remake of the original rather than a sequel.[2]

A large amount of enemies were planned out for the game, but many of them never went further than concept ideas. Several variations of enemies exclusive for each stage were planned, but usually only around half of the designs ended up in the game. There are unused variants of several of the game's enemy types, such as the Commando Troops, Mutant animals, Fortress Guards, Armored Guards and Flying Turrets. A few scrapped enemies do appear briefly in prerelease videos, however, showing they were atleast introduced into the game, even thought they'd finally be removed from the released game.

Several bosses also went through many different stages of development, usually starting out with very complex designs and patterns and then becoming simpler with each redesign. Limitations in technology and the need to create polygon models may have contributed to this changes. The Reactor Core and Drill Cruiser are examples of bosses who went through significant redesigns during development.

Other bosses remained visually identical but started out with more complex patterns that were either simplified or removed. The Frozen Mammoth, for example, was planned to shoot reflecting laser beams from its mechanical body and tusks, as well as use its trunk as a machine gun. The first move was simplified into homing plasma orbs, while the second was scrapped entirely.

Strider 2 was planned to include 6 stages since the beginning, with all stages staying more-or-less the same as the final release. The idea of allowing the player to choose the order of the initial stages was apparently inspired by a similar scrapped concept considered for the original Strider, which would have allowed players to choose the order of the 3rd and 4th stage. One stage, known as the "Ruins Stage" in development and later El Dorado, was eventually scrapped for unknown reasons, and the models of its first two scenes repurposed for the high score screens. The scrapped level carries the stage ID 03, placing it just between the initial selectable stages and the first of the two locked ones. The stage would later be reworked for the PlayStation port as a secret stage.

A number of extra scenes were considered as well, but dropped from the final release. The most interesting being a high-speed section for the Antarctica stage which would have seen Hiryu face a number of snowboard enemies.

A short, 30-second teaser trailer was displayed during the AOU Show event held in February 1999, being the only media displayed during its public reveal. This is the earliest known footage of Strider 2 to exist, and as such it display a very early in-development build. The footage in question consists of several short sequences of Hiryu running around some areas, almost exclusively those from the 2nd stage (Fortress Wahnen). There's also no visible HUD in any part of this video, showing how early this build probably is.

The May 1999 release of the Capcom Friendly Club CFC Style Fan Book official newsletter includes a VHS video showing footage of several upcoming Capcom games, Strider 2 among them[1]. The footage is from a slightly altered build when compared with the previous trailer, with a few changes made but still retaining some of the prototype features seen in February.

In this video, almost all stages are featured and enemies are already in place in most areas. The logo at the end is the same as before, but now includes a "Tentative Title" (仮称) under it.

The June 1999 issue of The PlayStation Magazine included an article about Strider 2. Screenshots are mainly from the 2nd stage, but it includes all stages except the Third Moon and El Dorado. Differences here are consistent with the ones seen in the video footage above, so it is likely this build is the same one or one closer to it. It is also likely this build is close to the build presented at the E3 event in May.

The August 1999 issue of the Capcom Friendly Club CFC Style Fan Book includes a 2nd in-development trailer for Strider 2[4]. Footage on this video shows a build closer to the final release, with its title and logo finalized, enemies now populating the stages, the HUD finished and visible and Hiryu's plasma arcs changed to its final appearance. But it still retains some elements that are either missing or were altered before release.

A few screenshots found in the flyer distributed during the AOU Show held September 1999 display minor differences not seen in the final release. 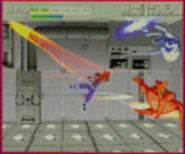 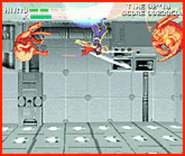 A second promotional video for Strider 2 was included with the December 1999 issue of Capcom Friendly Club CFC Style Fan Book[6]. This video serves as an introduction to the game, displaying its prologue text and presenting the game's three main rivals (Solo, the Kuniang and Hien). The build displayed here is very close to the final release.

One apparent oversight in this build appears during the Sturmgeschutz V battle, where its name is misspelt "STURMGESHUTZ IV" instead.

A trial edition of the PlayStation port was included with an issue of the Japanese magazine Dengeki PlayStation. This demo has only the first stage accessible, which appears to be mostly complete save some missing features like music.