Start a Wiki
The Stealth Chopper (無音ヘリ) is an armored vehicle briefly featured in the Strider Hiryu manga as a minor obstacle in the first chapter. The chopper also makes a brief cameo in the NES adaptation's intro, standing behind Kain before blowing up.

The Stealth Chopper is an anti-tank armored helicopter used by the Kazakh Secret Police during their assault on the Rebel Army's hideout[1]. The helicopter is built with powerful ceramic armor and bulletproof carbide glass, making it impervious to small-caliber firearms in a direct attack[2]. It is also heavily armed, sporting twin vulcan cannons on its front and a set of rocket launchers installed on the left wing. The chopper is controlled by two infantrymen, a driver and a gunman.

Following the destruction of the T-48 tank, the Stealth Chopper attempts a sneak attack on Kain, but he is able to evade the barrage of bullets just before being hit. Forced to escape throughout the city streets, Kain is able to evade the continued assault until Sheena appears to support him. Being unable to damage the helicopter due to its armor, she decides to aim at its tail instead. Destroying the rotor blade, the chopper spirals out of control and finally explodes against a nearby building. 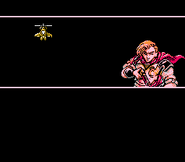 Retrieved from "https://strider.fandom.com/wiki/Stealth_Chopper?oldid=9063"
Community content is available under CC-BY-SA unless otherwise noted.