Edit
watch 01:06
'Strider' - Launch Trailer
Do you like this video?
Play Sound

Strider, known in Japanese as Strider Hiryû (ストライダー飛竜), is the fifth entry in the Strider series. As with previous Strider games, it is a 2D side-scrolling action platformer; however, this game introduces a semi-open world and exploration elements. The game was developed by Double Helix Games, while working closely with the Capcom team in Osaka, including the designer of Super Ghouls 'n' Ghosts and the enemy artist from Strider 2[5] (Koji Oda and Sho Sakai, respectively).

The game was released through digital distribution in February 2014 for PlayStation 3, PlayStation 4, Xbox 360, Xbox One, and on PC via Steam. In 2018 it was added to the subscription service PlayStation Now, making it available for play in PlayStation 5 as well.[4]

Strider is said to be a retelling of the "classic Strider story", the basic setting used in both Strider and Strider 2 centered in the battle between Hiryu and Grandmaster Meio, but intended for a modern audience[6][7]. Although often called a reboot of the franchise, the developers at both Double Helix and Capcom didn't intend for it to be one[8] nor for it to replace any of the previous games in the franchise[9], instead treating it as another entry in the series with no direct ties to its predecessors, just like Strider 2[6][8] and the James Bond film franchise.[7][9]

Strider is set in the year "Meio 0048" in an alternate dystopian future Earth under the oppressive iron-fisted rule of the mysterious and all-powerful Grandmaster Meio[10]. Having appeared suddenly on Earth one day, Meio waged war with his own army and took over the whole planet in only a few years, and now exerts complete control from his base at Kazakh City while secretly having more sinister plans for all the life on the planet. Hiryu, the youngest agent to reach Special-A Class in the hellish Striders training program, is sent on a mission to eliminate Grandmaster Meio, as he is the only one capable of carrying out such assignment, with other previous Striders given the same mission slain.[10]

Strider is described as an intense side-scrolling action platformer, in which the player controls Hiryu and freely explore the expansive metropolis known as "Kazakh City", gaining new abilities and support items which, in turn, can be used to open up previously-locked areas of the city. Hiryu retains his acrobatic movements and ability to climb through any surface. Also, he inherits techniques from previous Strider games as well as his fighting game appearances. In addition, he can acquire powers that are new to the Strider series.

The game's main mode, "Story Mode", includes three selectable difficulties. There are two unlockable Challenge Modes to be found in-game: "Beacon Run" is a race-style mode where players are challenged to reach checkpoints across enemy-infested areas as fast as possible; while "Survival" test a player's fighting skills against waves of enemies. All three modes have ranked scores for fastest times and global leaderboards.

There are also a set of 11 costumes to be unlocked, and a customization option after all are found that lets the player alter the colors of Hiryu's uniform.

Unlike previous games in the series, Hiryu's health is represented by a Health bar positioned at the top-right side of the screen. A Plasma Energy bar below it represents energy required for some of Hiryu's techniques. Left of both bars is a circular gauge marked with Hiryu's "Hi" kanji, known as the Charge Strike Meter; this gauge fills up as Hiryu hits enemies and decreases when he's hit himself, and when filled up Hiryu goes into Charge Mode: he starts glowing and his attack and range are increased for a short period of time. The top-left side of the screen includes a mini-map which shows Hiryu's exact location and his current objective. During boss fights, the map is replaced with the boss' health bar.

Hiryu's trademark freedom of movement and agility remains intact in this game. Hiryu can jump, cartwheel, slide, dash, perform flips and move across any direction, as well as climb through almost any surface and angled platform in his way to maneuver around and reach new areas. During the course of the game, Hiryu will unlock several moves which further expands his mobility options, such as the "Double Jump" or the "Plasma Catapult".

Hiryu retains his iconic Cypher as his sole weapon of choice. His attack options have been greatly expanded, now being able to swing at different angles, below and above him as well as perform an overhead uppercut slash that sends enemies flying upwards. The Cypher can also be upgraded with several new moves found throughout the game. Hiryu can also perform his signature Slide attack and later obtains throwing Kunai, which lets him attack enemies at a distance or who are otherwise difficult to approach.

Hiryu can unlock several different techniques and modes for his Cypher as he progress in the game. This time, however, they are also vital for stage progression as they are required to open or break through closed areas. These techniques need to be obtained from special pickup containers or "cradles" scattered across the game, hidden away and/or protected by boss fights.

Hiryu also gets access to his three support robots, the Options. They have been updated with new attacks, inspired by their behavior in the Marvel vs. Capcom series, and functions. When obtained, a small square icon below the energy bar indicates which Option is active. They can be summoned at the same time now, but each summon uses up part of the Plasma Energy bar.

Pickups in Strider are meant to be found and collected rather than being temporary power-ups or score-up items, like in its predecessors. As such, these items are often not readily visible or they require backtracking and using skills that are unlocked as the game progress.

The map found in the Pause Menu shows the total percentage of items collected in any one of the game's 10 areas.

The PlayStation 4 and Xbox One version of Strider provide an increase of resolution and frame-rate over the PlayStation 3 and Xbox 360 versions, 1080P and 60FPS over the latter's 720P and 30FPS. These versions also include extra graphical upgrades such as increased character model fidelity, "Screen Space Ambience Occlusion" (SSAO), better shadow filtering and lighting, and larger and more expressive particle effects.[11]

Out of the five versions, the PlayStation 3 was the only one to receive a retail/physical release exclusively in Japan. Both physical and digital Japanese releases came packaged with exclusive content: a custom "Strider" PlayStation 3 theme, a special video interview with the original coin-op director Kouichi Yotsui, and download codes for the "Game Archives" version of the PlayStation port Strider Hiryu 1 & 2. The physical version was also issued in a limited edition bundle called Strider Hiryu Special-A Class Limited Edition with several extra goods, sold through Capcom's "e-Capcom" online shop.

No exclusive/additional content was included on the game's English release[11]. Pre-ordering the Steam version, however, included two digital bundles: a soundtrack and a pdf "Concept Art" file with 15 pieces of official artwork. 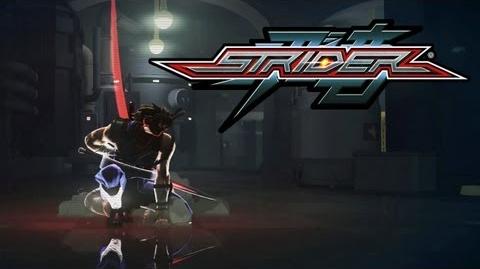 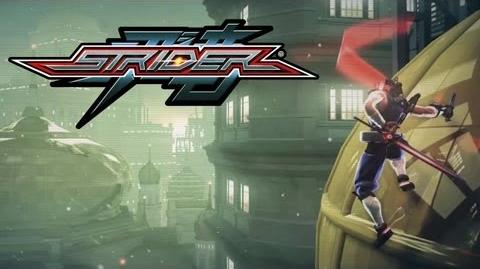