Sturmgeschutz V (Ｖ号突撃砲) is a boss character from Strider 2, appearing as the Scene 3 boss in the second stage, Fortress Wahnen. The enemy is named after a World War II anti-tank vehicle whose name translates to "Storm/Assault Gun" in German.

The Sturmgeschutz V is a two-legged, walking armored tank engineered by the mad scientist Herzog Schlange. It stands guard at the entrance gate of Fortress Wahnen, at the end of the Connecting Bridge. This powerful machine is very precise, being able to walk, crouch and even dash at high speed with its two legs, and possess an array of powerful weapons, including a main turret gun atop its chassis and the ability to lay mines as it moves. It is also protected by a swarm of "Knight" model Flying Turrets.

Hiryu faces the walking tank in front of the castle gate, following the destruction of the T-54 armored vehicle. Once damaged enough, the tank trips backwards until it falls into the fortress' entrance just as it is unlocked for Hiryu to proceed.

Sturmgeschutz V is a strong enemy with some variety in attacks and a large amount of health. When the battle starts, it stands far away and simply shoots at Hiryu with its turret gun. When approached or damaged enough, however, Sturmgeschutz V proceeds to dash across the area while laying ground mines behind it, which with the addition of the Knight turrets' covering fire, makes it difficult to avoid.

Though a fast opponent, Sturmgeschutz V tends to trip backwards when hit enough times, leaving it vulnerable. And while quite durable, it can still be somewhat easy to keep it locked with a barrage of hits before it can perform an attack.

In early builds of the game, this enemy went under the misspelled and differently-numbered name "Sturmgeshutz IV". Its unknown why the number was changed, although it is worth noting that a "Sturmgeschutz IV" does exist in real life.

Known concept art of the machine, on the other hand, calls it the "Sturmgeschutz VII" instead.[1] 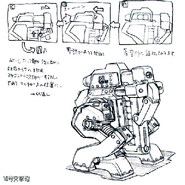