Tricks or Power Tricks[1] are special abilities used by Hiryu in the NES Strider.

A Trick is a special ability Hiryu learns by leveling up throughout his mission. Tricks range from offensive attacks and projectiles to healing and other tactical abilities. These abilities are often referred to as "gadgets" Hiryu uses, but in actuality there's no clear information about their true nature. A number of them, however, appear to be abilities generated from the Cypher itself, in spite of being gained through leveling instead of being unlocked like the Plasma Arrow.

There are a total of 9 Tricks, each one requiring Energy Points (EP) to use. To use them, they must be selected with the A button in the menu screen accessed by pressing Select. Certain Tricks (Fire, Spark, SP-Ball and Ground) disables Hiryu's basic attack if there's not enough EP to use the Trick in question (Hiryu makes a motion but the Cypher's arc doesn't come out), and so must be unselected by pressing A on "TRICK" at the menu screen.

The Fire Trick is the first one unlocked at Level 3 (after Hiryu obtains Kain's cell key from the Commander in Egypt).

When selected, Hiryu shoots a fireball in a straight line with each swing of the Cypher, each shoot costing 5 EP. The fireball travels full-screen and is roughly as strong as a basic attack, which coupled with its low cost provides for a long-range attack option that's faster than the Plasma Arrow.

This is one ability that can disarm Matic during his boss battle, but doing it close to him will allow him to disarm Hiryu first instead.

Medical is the name of three different Tricks unlocked at different levels. Selecting any of them from the menu instantly restores a set amount of Hiryu's Health points. Although named the same in-game, the manual identifies the latter two as Medical 2 and Medical 3.[1]

The Spark Trick is learned at Level 5 (after meeting with Kuramoto in Japan).

When selected, Hiryu shoots an electric orb with each swing of the Cypher. The released spark travels across the ground, and up to walls if one stands in its path. The Spark is roughly as strong as the Fire Trick and also costs 5 EP per use.

At Level 9 (after defeating Faceas Clay), Hiryu learns the SP-Ball (Spark Ball[1]) Trick, an upgraded version. Except for being stronger and having a 15 EP per-use cost, the SP-Ball works identical to the Spark.

Both moves are best used to eliminate enemies standing in inclines, like the Mechanical Snails found in Egypt and China, although SP-Ball is not very useful given its EP cost and how late in the game it is unlocked. They can also be used to disarm Matic, but doing so near him will have him disarm Hiryu instead.

This ability is also used by the "Spark Machine" enemy, which releases three in quick succession to attack Hiryu.

Jump is a Trick learned at Level 5, together with Spark.

When selected, Hiryu's jump height is doubled for around 10 seconds, allowing him to reach platforms that are otherwise too high for his normal jump. This effectively replaces the dreaded Triangle Jump as an option and is useful to sort certain tricky areas and pits in later stages. It costs 10 EP per use.

Warp is a Trick learned at Level 6 (after destroying the ZAIN Terminal in China).

Once selected, Hiryu is instantly teleported out of the stage and back to the Blue Dragon, something that previously could only be done by returning to the beginning of the stage and jumping up. This is an useful Trick to leave areas once an item is found or if lost. It costs 30 EP to use.

In a bit of irony, after finishing a mission in all stages previous to obtaining the Warp Trick Hiryu must backtrack all the way to the beginning in order to leave, but in all stages following its unlocking Hiryu is sent instantly to the Blue Dragon after completing his mission.

Ground is the strongest offensive Trick and overall move in Hiryu's arsenal, learned at Level 7 (after destroying the Africa ZAIN Terminal).

When selected, every swing of the Cypher generates a full-screen earthquake capable of destroying anything on sight. It costs 30 EP to use. Although powerful, the ability has very little practical use thanks to the console's limitation usually allowing only 1 enemy on-screen at a time, practically neutering its use as a screen-clearing tool. Its big EP cost also makes it impractical against bosses.

The Tiger Handheld port of Strider features a different take on the Spark Trick, perhaps partially inspired in the Option A from the Arcade game.

When activated, the Spark releases a spiked orb called an "electric ball", which spins around Hiryu creating a protective shelter against enemy attacks. By attacking, the Spark's orbit expands to cover almost full-screen range, taking down enemies standing at both sides. Using the Spark consumes 1/3 of Hiryu's Energy gauge.[2]

The word "Cypher" (サイファー) is used instead of 'Trick' in the unreleased Famicom prototype, making all its associated special abilities selectable functions of this weapon.

In a promotional commercial for the Japanese version the subscreen displays "Power Trick" (パワートリック) instead, a name that was later used in the English manual. 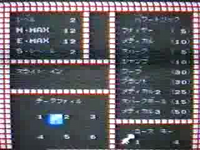 Retrieved from "https://strider.fandom.com/wiki/Trick?oldid=11176"
Community content is available under CC-BY-SA unless otherwise noted.