This article lists all known unused content found in the NES version of Strider.

An unused boss character can be found dummied out within the game's code. This character is a tall man with long hair, and possess a total of four sprites: standing idle, pointing upwards, extending his arm forward and jumping. There's also a small fireball projectile next to him.

The Famicom prototype actually features this character in-game, but its programming is incomplete. When faced, he stands in place and summons a spinning ring of fire around him, but it disappears a short distance after thrown, and if it doesn't hit Hiryu the boss is frozen in place and takes no further actions. As he appears in the spots where Dragon Fiend is faced in the Red Dragon stage, it's presumed he was removed and replaced by him due to its incomplete coding. 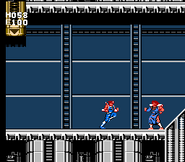 Unused boss in the Famicom prototype

The sprite with the palette from the prototype